Gamma rays form part of a standard process for the sterilisation and decontamination of medical devices. But, although the technology is advantageous and well established, the process can be complicated. Tim Sandle, head of microbiology at Bio Products Laboratory, and Madhu Raju Saghee, quality assurance professional at Gland Pharma, investigate.

Disposable medical devices, including syringes, implants, cannulas (flexible tubes) and intravenous sets, are required to be sterile. Given that plastics cannot be subjected to sterilisation by heat, for plastic medical devices, the primary way in which they are sterilised is by gamma irradiation (electromagnetic irradiation).

There are alternative sterilisation processes for medical devices, including electron beam irradiation, ion beams and ethylene oxide gas, but the advantage of using gamma irradiation
is that it has a high penetration capability. This means that products that are relatively dense or moderately sealed can be sterilised in a fairly straightforward way. However, although gamma irradiation is an established process, various factors need to be weighed up.

"Gamma irradiation sterilises materials through the energy from photons of gamma radiation."

These include microorganisms that are typically on the device during manufacture (this natural load can be reduced substantially when devices are assembled in cleanrooms), the type of polymer used to manufacture the device, and the selection of appropriate process controls.

Irradiation is the process by which an object is exposed to radiation. Gamma irradiation sterilises materials through the energy from photons of gamma radiation (provided by a radioisotope) being transferred to the electrons in the target material. This creates highly active electrons (a process called ionisation) and highly active free radicals. These physical elements are capable of breaking the DNA within microorganisms and spores, which destroys them as well as prevents them from replicating, thus causing sterilisation.

The source of gamma irradiation used at most facilities is a radioisotope called Cobalt-60, which is specially manufactured for use by irradiation plants. Cobalt-60, which performs as an energy source, is normally derived as pellets and placed into stainless steel tubes known as pencils. The pencils are, in turn, housed in a reinforced concrete structure called a cell (usually two metres thick) because shielding from gamma rays requires large amounts of mass.

The Cobalt-60 pencils within the cell are held in a source rack, which has two operating positions. These are the storage position where the rack is either immersed in water or sometimes deep within concrete, and the operational position whereby the rack is raised. It is when in the operational position that sterilisation takes place. The storage position is needed because Cobalt-60 cannot be turned off; it continues to emit radiation.

"The source of gamma irradiation used at most facilities is a radioisotope called Cobalt-60."

Sterilisation by gamma radiation is a cold process and does not require any special physical changes like heat or pressure in order to activate the sterilisation process. The process involves the product being placed into special containers called totes, usually constructed from aluminium. The amount of product that can go into a tote is established during validation. On this basis, it is important to check the dimensions and weight of the product to be sterilised prior to beginning the process.

For the sterilisation process, the Cobalt-60 source is raised and the tote containing products is moved around the source. The movement is at various heights and involves the rotation of the tote so that different sides of it are exposed. This ensures that adequate penetration by the radiation occurs and that the required dose of the product is achieved. The speed at which this takes place depends upon the dose required. The dose is established during the validation. Because Cobalt-60 has a relatively short half-life (less than five-and-a-half years) the rate of decay varies and the process speed needs to be checked each day to ensure that the product in each cycle receives the correct dose.

Sterilisation is demonstrated using devices called dosimeters, which measure the theoretical radiation dose received by the product. Dosimeters are plastic devices which contain a complex dye. After exposure to gamma irradiation the dye inside the dosimeters alters and the greater the level of irradiation, the darker the dye becomes.

Dosimeters are placed in the tote and on the packaging of the product. At the end of the sterilisation cycle, the dose is checked by testing the dosimeters. This is undertaken by measuring their optical density using a spectrophotometer and the material thickness with a microscope. The relationship between these two variables allows the dose calculation to be made.

The importance of validation

Before any sterilisation process can be carried out on a medical device it requires validating. This is in order to establish process parameters that can be replicated for routine sterilisation and to show that the sterilisation cycles can achieve a sterility assurance level of 1×10-6. This is a theoretical concept where it is assumed that, in terms of probability, no more than one item sterilised out of one million would contain one or more microorganisms after the completion of the sterilisation process.

Validation involves determining the dose required to be absorbed by the product in order to sterilise it. This is called the dose profile and it is assessed by dose mapping. For medical devices the validation is typically performed in triplicate. The unit of absorbed dose is the Gray (Gy), typically measured as kiloGrays (kGy).

"Because most medical devices are constructed from plastic, there are inherent degradation risks in any sterilisation process."

The Gy is defined as the absorption of one joule of ionising radiation by 1kg of matter. The dose required by medical devices varies and a careful balance needs to be struck between having a sufficient dose in order to ensure sterilisation happens but not too great a dose that the material is damaged (such as becoming brittle or discoloured) or that a chemical reaction takes place which cause a chemical substance to leach out of the material.

Because most medical devices are constructed from plastic, there are inherent degradation risks in any sterilisation process. Degradation is the change in properties of a polymer, such as tensile strength, colour, shape or molecular weight. For critical items long-term stability studies are often undertaken to study the material over its shelf-life and across the typical storage temperatures. This involves physicochemical testing. A common radiation dose used for plastics is in the range 15-25kGy, although it can be higher for denser materials.

The dose profile is based on assessing the absorbed dose. This is based on the density of the medical device, the pack size, the amount of wrapping around the product, the dose rate and the exposure time. This will vary between sterilisation plants because each plant design will be different. This means that validation is not transferrable between plants and must be repeated if a different sterilisation plant is selected.

It is important that sterilisation facilities operate to standards. The most common standard adopted for gamma irradiation is ISO 11137-1:2006, developed in association with the Association for the Advancement of Medical Instrumentation.

Standards are important so that the manufacturers of medical devices know that the process is being undertaken to a recognisable guideline and that there is a level of consistency between different sterilisation plants. The adoption of a standard also provides the medical device manufacturer with a template with which to construct an audit of the sterilisation plant.

Gamma irradiation has distinct advantages and is one of the most effective sterilisation methods available if the validation is sufficiently robust. If it is not, however, then the sterilisation either simply will not work or the medical device itself will be at risk from material degradation. 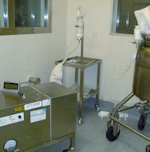 Gamma irradiated items in a cleanroom. 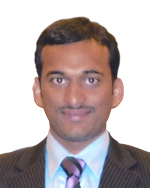 Madhu Raju Saghee is a quality assurance professional at Gland Pharma, India. Gland Pharma was established in 1978 as an exclusive facility for Small Volume Parenterals, and is now a research-focused organisation continuously developing niche products for the Indian and global pharmaceutical markets. 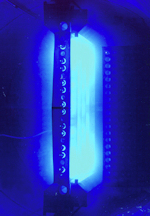 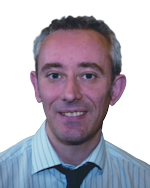 Tim Sandle is head of microbiology at Bio Products Laboratory and a visiting tutor at the University of Manchester. Sandle has over 20 years’ experience of designing, operating and reviewing a range of microbiological tests. 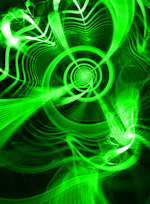 Gamma irradiation is one of the most effective sterilisation methods of medical devices.
Post to: