Whether the technology monitors, manages or stimulates, someone’s probably trying to make it into a wearable – and the market is booming in line with the rise in telemedicine. Abi Millar asks Neil Harris, general manager of Abbott’s diabetes care business in the UK and Ireland, and Bernard Ross, CEO and founder of Sky Medical Technology, how breakthrough devices split the difference between patient and consumer.

Over the past decade, the consumer wearables market has grown from a niche idea to a seemingly unstoppable force. The likes of smartwatches, wristbands and even smart patches have surged in popularity, driven by the rise in health and fitness tracking and the so-called ‘quantifiable self’.

According to recent Gartner research, global spending on wearable devices will total $81.5bn in 2021, an 18.1% increase on 2020’s figure. Consider the near-total lack of wearables ten years ago – the Apple Watch, for instance, didn’t launch till 2015 – and it’s clear to see how transformative the past few years have been. Business Insider claimed “there’s still a great deal of scepticism out there about how big the market potential is for wearables” as recently as 2013.

With that scepticism now in abeyance, most people are familiar with these devices. No longer for techheads only, they are typically intuitive, attractively designed and easy to use. What is interesting from a medical device perspective is the way these gadgets blur the boundaries between consumer electronics and traditional healthcare. For sure, sleep tracking and step counting functions may not be ‘medical’ as such – but the picture gets murkier when the device is capable of heart rate tracking or electrocardiography, and can be configured to send the user’s data to a doctor.

At the same time, many ‘true’ medical devices are becoming more compact, comfortable and consumerfriendly. Particularly since the start of the Covid-19 pandemic, there has been a demand for wearable technology that can monitor a patient continuously, transmitting health metrics in real time.

The consumerisation of healthcare is gathering pace, and nowhere is this more apparent than in the wearables market.

Abbott’s new FreeStyle Libre 2 device, for people living with diabetes, is a prime example. The device is a sensor-based technology with three optional alarms (low glucose, high glucose and signal loss) that can alert people to changes in their glucose levels in real time. As of March 2021, it is widely available on prescription in the UK for those with Type 1 diabetes, including children and young people aged four to 17.

“We understand that it is important that the product fi ts into people’s lives so they can keep on doing the things that are important to them.”

“The FreeStyle Libre 2 system consists of a small, round sensor worn on the back of the upper arm for up to 14 days, which measures glucose every minute in interstitial fluid through a small filament,” says Neil Harris, general manager of Abbott’s diabetes care business in the UK and Ireland. “This is inserted just under the skin and held in place with a small adhesive pad. Glucose readings are available with a one-second scan over the sensor using a compatible smartphone or reader.”

The sensor checks glucose levels every minute, even if it isn’t scanned, and summarises these readings in a graph on the user’s smartphone or reader, as well as calculating the time they spend in their blood sugar target range. When they do scan the sensor, users can see their current glucose level and trend projection. Apart from in exceptional circumstances, there is no need to finger prick for insulin dosing.

“Finger pricking has been a significant, but difficult and painful part of living with diabetes for a long time,” says Harris. “Without knowing what glucose levels are, it is much more difficult to make informed treatment decisions, which leads to suboptimal glycaemic control and poorer diabetes management.”

This device, which has evolved from technology first developed in 2008, seeks to improve health outcomes for the 463 million people living with diabetes globally (both type 1 and type 2). Researchers at Abbott combined a decade of scientific research, feedback from thousands of potential users, and a wealth of chemical, technical, electrical and design expertise.

While the product clearly meets medical device standards, the design owes as much to consumer wearables as it does to traditional disease management technologies. The developers’ main focal points were affordability, accessibility and discretion.

“The FreeStyle Libre 2 system is designed with the user in mind – the person who has to manage their diabetes every day of their life – whether they get the device on prescription from the NHS or buy directly from Abbott,” says Harris. “We understand that it is important that the product fits into people’s lives so they can keep on doing the things that are important to them.”

He adds that the data generated gives people a chance to make immediate decisions about how they manage their diabetes and the ability to share information with their healthcare team. In many areas of chronic condition management – and particularly since the start of the pandemic – medical innovations are making it easier for patients to connect remotely with doctors.

The device is just one in a raft of diabetes management devices to have hit the market in recent years. Insulet, Medtronic and Dexcom all have product launches planned for 2021, in what has been called a ‘watershed year’ for the market.

A similarly slick-looking device – albeit one that serves quite a different purpose – is Sky Medical Technology’s geko. The device is indicated for at least three different issues: the prevention of venous thrombosis; the prevention and treatment of oedema; and wound therapy applications in hard-to-heal leg ulcers. Sky Medical Technology says the total market opportunity in each of these areas stands at ?202m, ?282m and ?603m respectively.

What’s unusual about the device is that it’s a medical device inspired by a consumer product, rather than the other way round. Bernard Ross, CEO and founder of Sky Medical Technology, started out by looking at flight socks for deep vein thrombosis (DVT) prevention – only to realise the technology had profound implications elsewhere.

“Although we could think of many medical products that had disseminated into consumer healthcare, we couldn’t think of anything that had gone from full commoditisation at a retail level back into proper hospital care,” he says. “The real risk of blood clots is not in civil aviation – the real risk is in a hospital environment, so prevention is really important. We also created a technology brand called OnPulse that may be more suitable for the retail market, when we decide to go into that area.”

Having taken the geko into the hospital market for DVT prevention, the company began to notice some additional applications. Because it works to increase blood flow in the legs, it can speed up wound healing in people with poor circulation. It can also reduce swelling after a knee operation.

“We’re doing a randomised controlled trial in wound healing that’s delivering superb results in our interim analysis and should complete this year,” says Ross. “There have also been studies in Canada, in patients who have a build-up of oedema in the legs after a kidney transplant. The geko device was shown to significantly reduce the swelling after a kidney transplant by increasing the blood flow to the new kidneys.”

As of 2020, there may be a fourth use: namely improving circulation in Covid-19 patients, who are prone to blood clots as a result of the disease. Other intensive care patients may benefit too.

“The idea of having a product that can be utilised in many high-risk patient groups in a hospital environment is really where we’re looking to play,” says Ross.

The best of both

In terms of where the boundaries lie between consumer and medical wearables, Ross points out that there are still some significant differences between the two. For instance, healthcare providers tend to favour single-use or single-patient disposable products, whereas multiuse rechargeable devices are preferred within consumer settings.

However, he thinks both types of devices need to strive for ease of use. Even when the care providers are the ones operating the device, it does need to be comprehensible to the patient.

“If a patient doesn’t believe in the care you’re providing, then compliance becomes extraordinarily poor,” he says. “With our technology, you feel a pulse once a second as the electrical signal goes into the nerve – which means as soon as you put it on a patient, they say they can feel it working. That is very calming, and they have no problem relaxing or sleeping with it on. In that regard, we do feel that the understanding of a wearer’s experience is relevant to both the consumer and medical markets.”

Over time, the company is looking to incorporate Bluetooth technology into the device, allowing it to communicate with the cloud and giving options for remote patient monitoring.

“We all know that there’s nothing more expensive than a product that isn’t used properly – and if a patient doesn’t comply with the protocol, you have less chance of getting a beneficial outcome,” says Ross. “Reimbursements, particularly in the US, are increasingly focused on monitoring patient compliance. And our technology is moving in that direction as well, as we move into a world in which care is increasingly going to be provided outside of a hospital environment.”

It’s clear, then, that while the difference between patient and consumer is blurring, this is a nuanced subject that will throw up different answers depending on the type of device. As telemedicine becomes more prevalent, we can expect to see many strong examples of devices that combine the best of both markets. 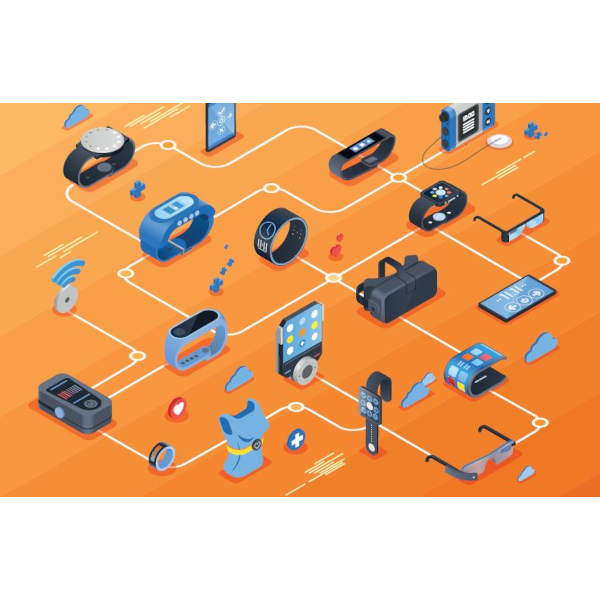 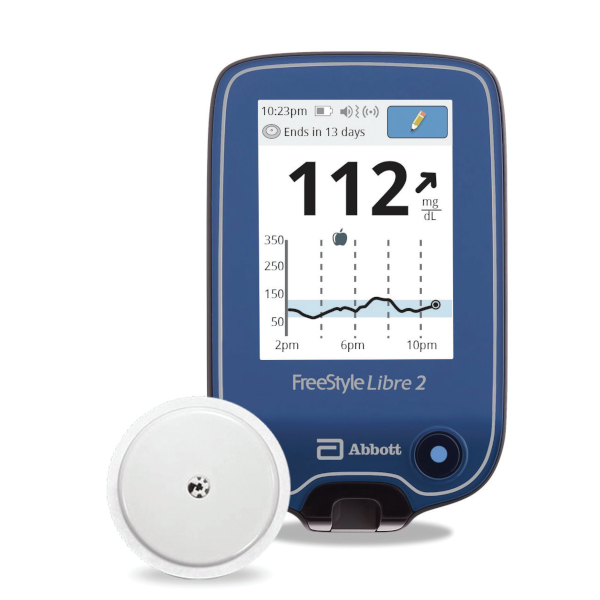 The FreeStyle Libre 2 sensor sends the user’s glucose readings to their reader (right) or smartphone. 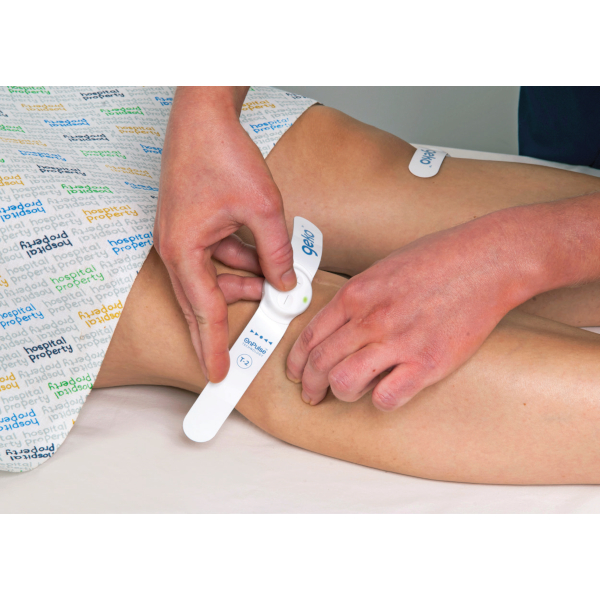 Sky Medical Technology’s geko devices can be used for a range of applications, adding up to a total market opportunity of over £1bn.
Post to: