Despite considerable effort, the problem of infections related to biomedical devices and implants persists. There are a number of strategies that can be used for the design of antibacterial coatings. Kerry Taylor-Smith speaks to Krasimir Vasilev, professor at the University of South Australia, about the advantages and disadvantages of the available options.

The healthcare industry has always been skilled at developing new technology or modifying existing ones to meet fresh challenges. But while medical procedures and devices are becoming increasingly advanced, the threat of high-risk infections from superbugs like MRSA, Clostridium difficile and Pseudomonas aeruginosa still remains.

Drug resistance is one of the world’s most serious and urgent public health issues, and it is estimated that 70% of all hospital-acquired bacterial infections are resistant to at least one drug. Antimicrobial coating technology appears to be the most proficient means of improving infection control in a healthcare setting, without compromising patient care.

Antimicrobial coatings are a powerful weapon against healthcare-associated infections (HAI); the coatings have been developed to prevent the growth, and spread of bacteria and germs on surfaces such as medical instruments, walls, counters, door handles and other high-touch areas. There is a wide variety of surface-coating technologies, ranging from pharmaceutical excipients and antimicrobial agents for medical devices and surgical implants, to coatings that ensure surfaces are disinfected.

Medical devices are a common culprit of acquired infections – there is always the risk of contamination when implanting any kind of foreign device in the human body. The effects range from mild discomfort, prolonged hospital stays, to death. It is predicted that the 80,000 bloodstream infections occurring annually in the US are a result of catheter use, while 0.5% of pacemaker recipients develop a serious infection.

As the number of HAI increases, the use of antimicrobial coatings becomes more extensive. Current best healthcare practices suggest that medical devices coated in antimicrobials can go a long way towards eliminating deadly infections as the antimicrobials are engineered to fight most gram-negative and gram-positive bacteria associated with HAIs.

A range of benefits

Furthermore, antimicrobial coatings can improve the cleanliness of a healthcare setting; they negate the need for the active cleaning agents normally used, and increase cleanliness on a considerable scale by reducing the presence of germs and bacteria in the air and on surfaces that they are applied to. Surveys suggest that most doctors actually prefer the use of antimicrobial coatings to standard powerful cleaning agents and disinfectants as they protect surfaces from microorganisms such as germs and parasites, as well as bacteria.

“The properties of an antibacterial coating need to be tuned for a particular application,” states Vasilev. “In some instances, it may be desirable to prevent bacteria attaching to a surface; while in other instances, one may want the coating to release antibacterial agents to eliminate infiltrating pathogens – preferably on demand.”

Silver is well known for its antimicrobial and antibacterial properties, so it’s no surprise that silver nanostructured antimicrobial agents are most prevalent; they can be used in the form of nanoparticles, nanowires and nanolayers. It offers a broad spectrum of efficacy against gram-positive and gram-negative bacteria.

The mechanism of how nanostructured silver acts as an antimicrobial agent is not well understood, but it is thought that the silver nanoparticles are partially oxidised and release silver ions, which acts as a major antibacterial agent.

These silver ions interact with four main components in the bacterial cells – the cell wall, plasma membrane, bacterial DNA and proteins. Here it causes degradation of the peptidoglycan cell wall and cell lysis, which prevents the bacteria from reproducing; the ions penetrate the cell interior and bind to DNA bases to prevent them from replicating. The ions may also cause chromosomal aberrations and mitochondrial dysfunction.

“Silver and copper are popular antibacterial agents to be used with antibacterial coatings and in particular silver, which has been known for millennia to keep water sterile and help wound healing.”

Stainless steel, which is often used in hospitals, does not have any bactericidal properties, whereas the antibacterial effect of copper surfaces is permanent as it is not prone to antibiotic resistance, thus reducing the risk of contracting an infection by 45%, according to studies.

58%
The decrease in the number of HAIs brought about by the use of antimicrobial copper surfaces in hospitals.
The Official Journal of the Society of Hospital Epidemiologists of America

Copper destroys bacteria by encouraging it to donate electrons to it, thus producing free radicals within the cell that can damage bacterial DNA and cell proteins. Furthermore, copper is also effective against viral and fungal pathogens.

Copper still struggles with the stigma of being old-fashioned and easily tarnished, but alloys that are resistant to tarnishing exist. They have a similar strength profile to steel and are often used around hospitals on door handles, bed railings and light switches.

“Silver and copper are popular antibacterial agents to be used with antibacterial coatings and in particular silver, which has been known for millennia to keep water sterile and help wound healing,” says Vasilev.

“Many other options are available. Antibacterial coatings can contain antibiotics, antibacterial peptides and polymers, specifically designed nanostructures that kill bacteria upon contact, such as in nature – for instance a dragonfly’s wing surface – and other metal ions such as selenium,” Vasilev adds.

Research in the field is active, particularly in the area of medical devices since infections are a major problem. Vasilev continues, “The widespread antibiotic resistance of bacteria makes the problem even more urgent. For example, infections are the reason for more than 50% of revisions done with orthopaedic devices – for instance, hip or knee implants. Many antibacterial coating technologies are in development. A technology that attracted particular attention in recent years is nanostructured surfaces that kill bacteria upon contact.”

Titanium dioxide is well known for its antimicrobial properties and research into a light-activated hard coating based on the compound is under way. The compound has been shown to kill 99.9% of E. coli using additional nitrogen and visible light, instead of ultraviolet light, presenting an understandable practical benefit.

Hydrophilic coatings are currently used to improve the wettability of devices such as catheters, but they also show promise for antimicrobial coatings too, where they could also be tailored to function more precisely – especially when it comes to how tissue and devices interact. They could feature biofilminhibiting surfaces to reduce bacterial colonisation and prevent invasive microbes becoming attached to easy targets, such as recently implanted devices. They could also become highly application-specific; short-term devices might release pharmaceuticals that aid healing and prevent clotting or infection, while permanent and semi-permanent implants could be coated with agents designed to promote or inhibit tissue integration as required.

The demand for antimicrobial coatings is growing, and will continue to grow as superbugs and other microbials become resistant to the drugs currently used to treat infection. Although metals such as copper and silver are noted for their antibacterial and antimicrobial properties, research into other types of coatings, particularly nanostructured surfaces that mimic nature and hydrophilic coatings that can be tailored to specific devices, is under way. This could offer some promising new ways of fighting infections related to biomedical devices and implants.

Metallic-based antibacterial coatings are versatile alternatives to traditional antibiotic-eluting coatings. They are particularly advantageous in reducing the risk of developing drug-resistant bacteria and have the potential for long-term antibacterial activity. By combining several different metal ions, they can be tailored to have broad-spectrum antibacterial and antifungal activity. They can also be customised to promote osseointegration and are typically biocompatible. However, there are some drawbacks associated with metallic-based coatings. Specifically, these coatings leach metallic ions continuously throughout the body, which in high concentrations can be lethal to mesenchymal stem cells, lymphocytes and mono-cytes. Additionally, silver nanoparticles can accumulate in tissues throughout the body and cause longterm damage. They have been found to accumulate in the liver, spleen, brain and skin, and have the ability to cause oxidative damage to cells.

A variety of polymer-based intrinsic antibacterial coatings have been developed that either function to repel the attachment (via hydrophobicity or nanotopographies) or directly kill bacteria that come in contact with the surface of the biomaterial (via cationic interactions). Polymer-based coatings are particularly advantageous because they do not leach any compounds into the body and are therefore typically biocompatible, and demonstrate long-lasting antibacterial activity while minimising the risk of the development of drug-resistant strains of bacteria. Additionally, the coatings can be tailored for broad-spectrum antibacterial activity and are typically robust. While these coatings offer many advantages over alternative coatings, some varieties do not kill the bacteria surrounding the implant but simply repel it. In some applications, this is sufficient; however, often it is necessary to completely eradicate the bacteria to prevent its proliferation instead of repelling it. 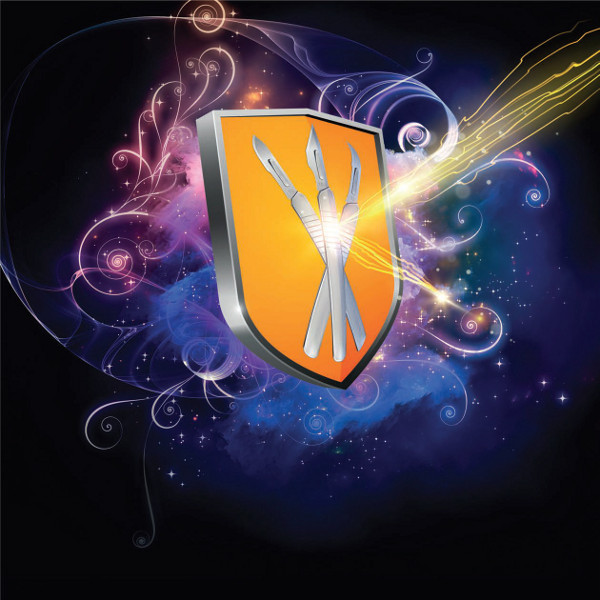 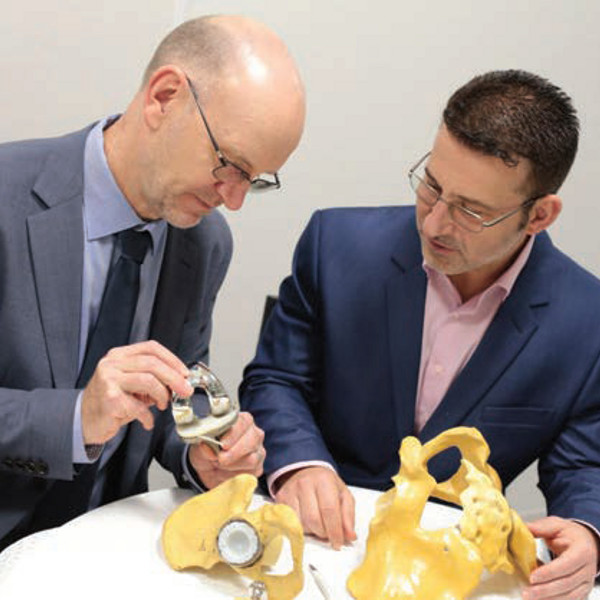 Gerard Atkins (right) and professor Krasimir Vasilev examining orthopaedic implants that will have a dragonfly wing-like surface.
Post to: