Chips with everything: microfluidics and diagnostics

Daniel Mark, Felix von Stetten and Roland Zengerle from the University of Freiburg consider the market impact of microfluidic lab-on-a-chip products in the field of point-of-care diagnostics, and argue that a microfluidic platform-based development approach and foundry-based manufacturing process are necessary to ensure their future competitiveness.

By now, probably everyone in the field of medical devices is aware of the lab-on-a-chip (LOAC) concept and its promise of miniaturisation and the microfluidic integration of diagnostic assays for automated point-of-care (POC) testing. For the younger generation of researchers in the field, this concept seems to have been around forever. It has become routine to hear about its multitude of possibilities: downscaling of sample and reaction volumes, increased parallelisation, portability, operability by untrained personnel, fast time to result, short turnaround time, and emerging markets in drug development and POC testing.

LOAC technology enables a number of diagnostic and therapeutic applications that were previously only dreamed of. First of all, systems for home-care testing sufficiently easy for laymen to use became available. Initially, this field was dominated by glucose testing, but further applications have emerged, such as lithium measurements for the monitoring of patients with bipolar disorder. Secondly, developing countries with limited central testing capabilities are expected to benefit from cheap, energy-autonomous and long-term-stable LOAC systems used in diagnostics. Thirdly, fast diagnostics for patients with acute symptoms, for example in intensive care units, will significantly improve the prognosis of patients by decreased morbidity and mortality.

When we look back at the early promises of LOAC and set them in proportion with their perceived socio-economic impact, we may ask ourselves whether we expected too much, or whether we have just not realised the concept's full impacts. Taking a closer look at recent market reports and developments, it becomes obvious that these promises have started to turn into reality, and that LOAC systems will prove indispensable in many fields of diagnostic applications.

The summary of recent achievements is best started with a general view on the market size of LOAC. In a broader sense, this market consists of microfluidic systems and components in the pharmaceutical, life sciences, medical device and in vitro diagnostics markets, the latter comprising POC testing. In 2006, the total volume of this market was reported to be $595 million. An optimistic projection suggested an average annual growth rate of 18%, which would have led to a market size of $1.9 billion in 2012. So did these great expectations come true? Recent numbers suggest a $1.4-billion market in 2013 with a growth rate of 27% taking it up to $5.7 billion in 2018, which means that, while falling short of predictions for this time, the market has still more than doubled in seven years.

"When we look back at the early promises of LOAC and set them in proportion with their perceived socio-economic impact, we may ask ourselves whether we expected too much, or whether we have just not realised the concept's full impacts."

Today, microfluidic LOAC devices with FDA-approved and CE-marked tests are established in all fields of POC diagnostics, comprising clinical chemistry, immunodiagnostics, nucleic acid testing and cell analysis. Many of these systems are still of "moderate complexity", according to the Clinical Laboratory Improvement Amendments (CLIA). However, a number of 'CLIA-waived' systems require a minimum of technical knowledge and training, while reagents are pre-packed, operational steps are automatically executed, and interpretation of results requires minimal judgment. In other words, these systems demonstrate that microfluidic-based products have started to penetrate the market.

Among the POC tests, nucleic acid-based tests (NATs) become increasingly important as they significantly shorten the diagnostic window between the onset of an infection and the appearance of antibodies detectable by immunoassays (which may last weeks or months). In the case of life-threatening infections, NATs can help reduce morbidity and mortality with great socio-economic impact.

"A wealth of LOAC applications for clinical diagnostics, decentralised and even home testing could emerge, helping to improve the health of the global population."

Although the POC NAT systems on the market are still of moderate complexity, and sample preparation and analysis is not fully integrated, they enable rapid diagnostics and goal-oriented therapy. We can also see promising research in the field of fully automated, sample-to-answer systems that integrate sample preparation, amplification and detection. Such systems have additional value in that they can be applied by untrained personnel and in resource-limited settings.

In summary, we can see a striking diversity of LOAC systems in the field of diagnostics: products for cell counting, clinical chemistry, immunodiagnostics and nucleic acid-based testing are all well established on the market.

Topics still to be solved

Considering the number of products on the market, it is evident that all technological hurdles for LOAC systems for a wide variety of diagnostic or analytical tasks can be overcome in an economically feasible effort. Nonetheless, to integrate the complete diagnostics process, from sample-taking through sample preparation and analysis to result reporting, is a long and expensive development, regulatory and marketing project. Time spans in the order of five to ten years and required funds from $10-100 million are reported.

To shorten development times and reduce the required R&D budgets, the use of any given LOAC platform for a large number of applications would be desirable. In our view, this is not out of reach, because the sample and reagent processing as well as the detection and readout principles are quite similar for a big variety of applications. As soon as those market-compatible LOAC platforms emerge, a large number of applications could be implemented on a handful of them for a fraction of the current development costs.

"With the emergence of microfluidic foundries, it seems there is plenty of room for a number of further LOAC products, even if there is still no 'killer aplication' in sight."

Another requirement of generic LOAC platforms is the consequent use of economically upscalable fabrication technologies for the assay-specific disposables, such as compatibility with injection moulding or thermoforming. Additionally, extra manufacturing steps such as surface coatings or inlay parts in the disposables should be reduced to a minimum, in order to keep the price of the final product acceptable.

Therefore, open these platforms could ultimately reduce the price of LOAC systems by shortening development times, thus increasing the number of attractive market niches for the concept. In theory, the assay-specific disposables for such a platform could be produced centrally for a number of customers by LOAC or microfluidic foundries, further reducing the costs for each application by the economy of scale.

In the beginning, we asked ourselves if the promise of LOAC from the past was too optimistic or if the concept was having a noticeable socio-economic impact. The significant growth of the microfluidic market, the respectable number of LOAC products with annual turnovers above $100 million, and the expected high growth rates of the field seem to suggest that LOAC has indeed arrived on the market and in society. This means that the market is already tested and has accepted its first products, even if these come at a premium price.

Certainly, the developments in the next few years will show if the substantial growth can continue or if it will flatten out. But with the prospect of further reducing development and production costs by using generic microfluidic platforms, and the emergence of microfluidic foundries, it seems there is plenty of room for a number of further LOAC products, even if there is still no single 'killer application' in sight. The philosophy of platform-oriented design and LOAC foundry services could open up a huge market consisting of the sum of many small, niche applications that would eventually benefit from automated microfluidic processing and fast turnaround times. While development cycles and production costs decrease, a wealth of LOAC applications for clinical diagnostics, decentralised and even home testing could emerge from this philosophy, helping to improve the health of the global population. So, in summary, we strongly believe the vision of LOAC is becoming a reality. 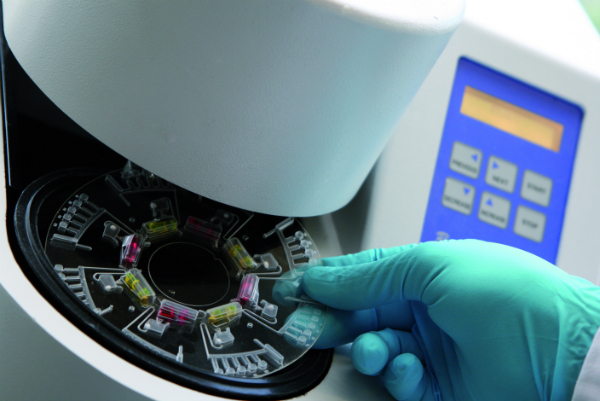 LOAC systems are expected to prove indispensable in many fields of diagnostic applications.
Post to: