There has been an enormous growth in the application of coatings on to medical devices in the past few years. Recently, novel coating techniques such as laser treatments, low-temperature atmospheric plasmas and microblasting techniques have also been developed for the deposition of bioactive coatings. Jim Banks looks at recent developments in the field.

In healthcare, implanted medical devices have become an everyday feature of life-saving treatment. The use of heart valves, vascular grafts and stents, as well as many other essential support systems for the body, is widespread and continues to restore physical function in thousands of patients each day. The performance of these devices is, therefore, vital.

Any object that is put inside a human body brings certain risks with it. If a device does not perform to its optimum level or harms the body in any way, there could be a serious risk to health and, potentially, survival. The coatings that are applied to these devices to mitigate potential health risks, protect the body or to improve the body’s acceptance of a foreign object are, therefore, as important as the design of the device itself.

A range of chemical-vapour-deposited polymers, known as parylene, is among the common choices of coating for medical devices and function as a moisture and dielectric barrier. Parylene C, not least for reasons of cost and performance, is the most popular choice and acts as an effective moisture barrier, which allows it to be a highperformance, bio-accepted coating for stents, defibrillators, pacemakers and many other devices permanently implanted into the body.

There exist many available options for coatings, but new techniques, properties and applications are fertile areas of research.

The percentage of patients undergoing primary or revision joint arthroplasty that are affected by prosthetic joint infection.

The number of joint arthroplasties performed annually in Europe.

Bioactive coatings have the potential to not only enhance the body’s acceptance of an implanted device, but also could have a positive impact on the device’s ability to function properly for longer. For many devices that are in contact with the blood, including stents and central venous access catheters that may stay in place for weeks, months or years, there is a risk of failure due to the body’s response to the implant.

Replacing devices that are compromised by clots or inflammation of the body’s tissues is an expensive option. The search for cost-efficiency has, therefore, fuelled research into coatings that can counteract the body’s natural responses. The challenge is to find a method depositing a thin film of bioactive compounds on to devices that will remain stable and effective over a long period of time.

This is not a new area of research by any means. For more than 30 years, drug treatments have been incorporated in the design of implanted devices. The anticoagulant heparin, for example, has been used in the coatings of cardiovascular devices to inhibit the formation of blood clots. Nevertheless, the potential for better treatments and novel coatings is still expanding.

“Bioactive coatings have the potential to not only enhance the body’s acceptance of an implanted device, but also could have a positive impact on the device’s ability to function properly for longer.”

Several different techniques have been tested, some with limited success, but the ability to have bioactive substances of drug treatments in a device’s coating has improved significantly over time. A growing number of new devices have successful bioactive coatings that can counteract inflammatory responses, aid in the repair of surrounding tissue, prevent blood clots or have antimicrobial effects.

Among those working in this sphere is Professor Krasimir Vasilev from the School of Engineering at the University of South Australia in Adelaide, whose recent work includes the exploitation of the unique qualities of plasma polymerised TEMPO coatings in targeting both infection and inflammation simultaneously, which could provide a novel alternative for the treatment of chronic wounds.

This is an area that has not much changed for many decades in part, as Vasilev and his colleagues point out, due to the complex problem that chronic wounds are simultaneously infected and inflamed. Their work has involved the development of coatings that, upon contact with water, leach nitroxides into aqueous supernatant, further to which they can exploit the cellsignalling qualities of TEMPO to change the cellular behaviour of bacteria and human cells that come into contact with the surfaces. This results in the suppression of biofilm formation of the opportunistic bacterium Staphylococcus epidermidis, and it can also disperse already formed biofilm.

Building on this research, Vasilev is now working with an Australian implant manufacturer on translating this novel antibacterial technology into a coating that can be used on hip and knee implants.

At the Wyss Institute for Biologically Inspired Engineering, a cross-disciplinary research institute at Harvard University that focuses on the development of bio-inspired materials and devices for applications a range of industry sectors, researchers including founding director Don Ingber have turned their gaze on innovative coatings. Its tethered liquid perfluorocarbon (TLP), which has recently been licensed to FreeFlow Medical Devices, is a non-stick coating for medical devices.

TLP, which underwent testing on pigs as part of the development process, uses no silver, copper or antibiotics. The idea is now being commercialised by a scientific team with extensive expertise in hydrophobic and superhydrophobic surface chemistry. In essence, it aims to prevent the formation of biofilms and thrombosis, which are responsible for a large proportion of hospitalacquired infections. Successful testing in arterial shunts and central venous catheters has already been conducted, and there is significant potential to extend the technology into ventricular assist devices and extracorporeal circuits.

In general, bioactive coatings perform to a high standard but are subject to limitations in their effectiveness. For instance, the reservoir of bioactive agents can only last so long. The integrity of the components in a thin film can also deteriorate over time in the harsh environment of the human body. For now, the only course of action is to remove and replace the entire device, though that may change in the years ahead.

A 2016 paper by Harvard researchers demonstrated that an innovative biochemical method could significantly extend the life of bioactive coatings without having to remove them from the body.

Their approach involves the use of an enzyme in a bioactive coating that inhibits the body’s natural response to the implant, including blood clotting. The enzyme acts as a catalyst for the linking of peptide sequences, and the researchers built on this principle to create their own – Staphylococcus aureus Sortase A – that substantially increases the catalytic activity.

The results of their experiments showed that rapid regeneration of thin-film coatings was possible in vivo. The potential for this approach to extend the life of implantable devices with bioactive constituents is substantial, though much work still remains to be done before it is in widespread use.

As well as the properties of the coatings themselves, there is extensive research into the methods used for applying the coatings to medical devices. Among those working in this field is Professor Dennis Dowling of University College Dublin’s Centre for Biomedical Engineering, who is also director of the I-Form Advanced Manufacturing Research Centre.

Dowling’s work includes plasma medicine, an emerging field that uses cold atmospheric plasma for therapeutic applications, notably in the area of skin diseases and wound healing. Plasma can act as an in vivo antiseptic without causing cellular damage and stimulates tissue regeneration. His work in this field has also extended to the atmospheric plasma coating of polymers.

Atmospheric plasma has an advantage compared with vacuum plasma treatments in that it can carry out continuous rather than batch processing. As a result, processing times are shorter and the cost of equipment is reduced. The work under way uses a reel-to-reel atmospheric plasma system developed in Ireland by Dow Corning Plasma Solutions. The result is nanometre-thickness coatings that retain the chemical functionality of the original precursors, which have been nebulised into the plasma.

Research at the University of Nottingham is taking a different approach. The university’s thin films lab is attempting to enhance the bioactivity of existing surfaces using physical vapour deposition (PVD) methods to deposit metallic, ceramic and glassy coatings on a wide variety of substrates. Some of its current research projects are focused on the use of degradable doped-glass coatings for antimicrobial effects, and also the use of passivating surfaces to prevent the degradation of magnesium to unlock its potential as a medical material.

The impact of implant-related infections in orthopaedics and trauma

The biomaterials and medical devices industry has experienced rapid growth in recent decades, thanks to technological advances and a sustained clinical demand. The industry is projected to maintain a compound annual growth rate of approximately 10% over the next 10 years, with orthopaedics and cardiovascular surgery continuing to lead the market worldwide.

According to a recent report, approximately 1.5 million joint arthroplasties are performed annually in Europe, while the prevalence of individuals with a hip or knee prosthesis in the US is around seven million. Osteosynthesis for long bone fractures shows a similar impact, with around 270,000 new implants inserted each year in France, or 403 per 100,000 people. This is comparable with the 395 joint arthroplasties performed each year per 100,000 people in the same country.

Although the application of implanting biomaterials is becoming more common, their long-term durability is not guaranteed, and infection remains one of the main reasons for early failure in orthopaedics and trauma. Despite the introduction of routine systemic antibiotic prophylaxis administration, as well as improved surgical facilities and procedures, prosthetic joint infection (PJI) affects 0.5–15% of patients undergoing primary or revision joint arthroplasty, when considering high-risk and oncological cases – though these figures may be underestimated. Surgical site infection (SSI) after internal osteosynthesis for closed fracture has a reported incidence ranging 0.5–10%, and up to 50% after open fractures. Post-surgical infection following spine surgery occurs in 1–14% of patients, depending on the preoperative diagnosis and type of surgery; similar figures are reported for a variety of surgical procedures involving implantable devices in orthopaedics and trauma.

The economic and social costs of implant-related infections are significant, with high morbidity and a possible increase in mortality. In particular, direct hospital costs – related to the management of PJI – range approximately €20,000–60,000, while the long-term economic effect of post-surgical infection after joint arthroplasty has been calculated to exceed $390,000 per case. 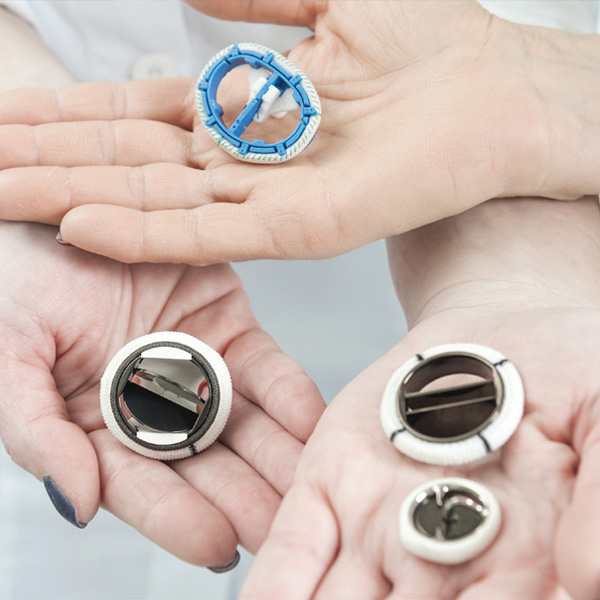 Heart valves: the use of heart valves, vascular grafts and stents is widespread and continues to restore physical function in thousands of patients each day. 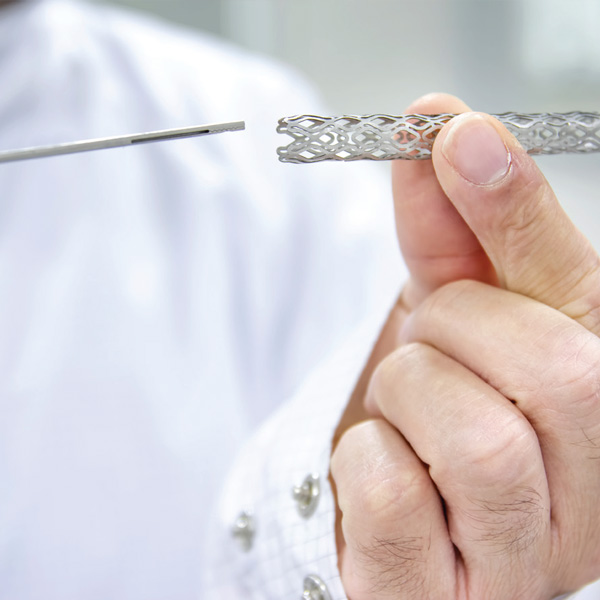 Heart stent: parylene C is a high-performance, bio-accepted coating for stents and many other devices permanently implanted into the body.
Post to: